How Does Amazon Do Performance Management? 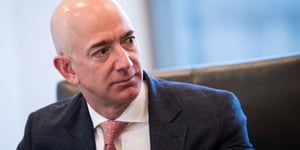 Is Amazon a lone wolf in the tech world?

Unlike Apple, Microsoft, Google or Netflix, Amazon's working culture is anything but glamorous. You won't find employees skateboarding across the office or kicking back in high-tech meditation pods. Yet, Amazon is undeniably a direct competitor to some of the brightest Silicon Valley darlings. So if it's not competing on Michelin-star rated lunches and unlimited vacation time, how is Amazon winning its talent?

In 2015, a controversial New York Times article described Amazon's culture as "purposeful Darwinism" and accused the company of creating an environment where employees are ruthlessly pitted against each other using a brutal rank and yank performance management system. But employees, including Jeff Bezos himself, spoke out against the article saying that much of it was nothing but hype.

So what's true and what's false when it comes to the retail giant's performance management system? Unfortunately, it's tough to know for sure. But luckily, there are a few clues that can give us a good glimpse into how leaders at Amazon run their employee appraisal process.

Before we start piecing together what we know about Amazon's performance management strategy, let's not forget how influential the tech giant is.

Amazon is arguably the most successful startup of our era, and has eclipsed the likes of Walmart as America’s largest retailer. Amazon created the modern category of retailing, pushing the boundaries on everything from eReaders to video streaming, web hosting, smart devices and so much more.

The tech giant currently boasts 100 million prime members and a market cap of about $380 billion. Its workforce is comprised of 560,000 employees from all over the world. Despite their top-dog status, Amazon remains ever-aware of the competition. “Our customers are loyal to us right up until the second somebody offers them a better service,” says CEO, Jeff Bezos, “And I love that. it’s super-motivating for us.”

The role of performance management at Amazon

But Amazon arguably gets its edge by using a data-driven approach with clear metrics to measure both consumer and employee behavior. In Gallup's more objective assessment of the company's work ethos, head of finance for Amazon Web Services, Sean Boyle says, "Data creates a lot of clarity around decision-making. Data is incredibly liberating."

So is performance management at Amazon about liberating employees to make the best decision on behalf of the customer or is it as ruthless and unfair as the Times suggested? The answer depends on who you ask. (More on that in a minute.)

“You can work long, hard or smart, but at Amazon.com you can’t choose two out of three.” — Jeff Bezos

Amazon's 14 leadership principles serve as clear performance guideposts. And almost all of them focus on an individual's ability to own and objectively test and defend their ideas, as opposed to "softer" things like collaboration or development.

But how does this play out in practice?

From what we were able to garner from a limited amount of public info, Amazon uses a "stack ranking" (a.k.a. "rank and yank") performance management process in which employees are rated against each other in an annual review.

As Don Weobong President of Telania e-learning platform puts it, "every aspect of a worker’s performance is measured and ranked — from the earliest stages of the onboarding process, employees are also treated as data subjects in every respect. At the end of the day, employees are only kept if their metrics add up."

But here's where it gets interesting. Amazon also uses continuous feedback via its "Anytime Feedback Tool". This is an internal platform where workers can anonymously praise or critique colleagues. While the majority of the business world grapples with annual vs. continuous feedback, as if it's an "either/or" debate, Amazon boldly powers ahead with both.

And for employees who literally don't stack up?

Amazon uses a 3-month "Performance Improvement Plan," (or "PIP") to help the employee get back on track. You can guess what happens if they don't.

What do employees and managers really think?

If scathing accounts like that of the Times are to be believed, you might be thinking, "No wonder turnover at Amazon is so high."

And it's true. Median tenure at Amazon is just 1 year. But at Google, it's 1.1 years — not much better despite its cushy 5-star perks and seemingly well-rounded performance management model. So what do employees love and hate about working at Amazon?

Here are a few anonymous Glassdoor testimonials that can help shed some light.

“Keep doing what you're doing. The reason such a big company can still operate successfully is because it runs as a start-up, and you can see that in every part of Amazon. Every Day is Day 1.”

“The culture demands that you're able to defend your views or decisions in a rigorous, data driven way, and accept criticism constructively without taking it personally. This doesn't suit everyone, however if it does, then both these things become significant Pros, adding to your experience and growth.”

“You work with smart people, you work on exciting projects, you are pushed to your limits...which can be rewarding when you accomplish great things. The diversity of the potential work and innovation can be very alluring. I've often called Amazon my 'Sexy Mistress'...she's emotionally abusive, but she's so sexy that I go back for more punishment."

“The management process is abusive, and I'm currently a manager. I've seen too much ‘behind the wall’ and hate how our individual performers can be treated. You are forced to ride people and stack rank employees...I've been forced to give good employees bad overall ratings because of politics and stack ranking.”

“You're responsible for your own career progression and finding the places and teams that are doing the stuff you want to do. No one is going to take you by the hand and help you with that.”

“You have to be self motivated. NO ONE will hold your hand and tell you that you're doing a great job. If you need constant affirmations from management, this company isn't for you.”

All of the above

Then there's the most famous employee review. The one that virtually cemented Amazon's reputation for "purposeful Darwinism".

“Amazon is built, quite deliberately, to be Darwinian. The strong survive and the weak perish (metaphorically speaking) and the 'bar' is constantly increasing. The level of performance that would have been acceptable five years ago will get you canned today. It’s a kinda crucible that will help you develop a harder edge, if you can survive, that will service you well in your career and in life.”

Diverse challenges, breakthrough performance, zero hand-holding — these are attributes that may work well with a specific type of high-performer, and they definitely seem to match Amazon's unique position as a fast and fearless innovator.

And there is some indication that respect for this approach is growing. The average company rating on Glassdoor from current and former employees is a 3.4 out of 5. As of 2018, Amazon receives an above average rating of 3.8 — up from its score of 3.4 in 2015.

But not every company has the kind of magnetic employer brand that can be considered the "Sexy Mistress" of professional growth. While Amazon's clarity of purpose and hard focus on objective, data-driven feedback are solid performance management principles, smaller brands who need to hang to their people might be better off leaving the "ratings politics" and "emotional abuse" at the door.