How Netflix does Performance Management 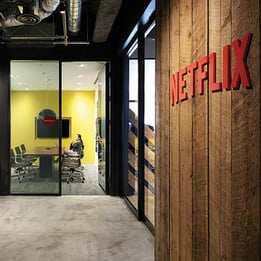 Netflix's no-holds-barred approach to HR has gained the attention of many, both good and bad. This is because they’ve succeeded not only in retaining prime talent, but also in achieving a high-performance culture.

The methods Netflix applies could be called radical, but they address challenges that all organizations face. Here are four common performance management challenges and how Netflix overcame them.

According to Netflix, leaders and managers need to live and breathe company values into everything they do. Your mission statement and company values are not supposed to just sound nice, they’re supposed to be displayed throughout the work of your employees.

Posted on Netflix’s famous culture deck, is a stark comparison between a list of Enron’s company values and photos of their leaders in handcuffs. They go on to state that Enron’s values weren’t truly what was valued there. Netflix wants to strictly reward and promote employees that demonstrate their values and let go of those who don’t. It’s that simple, but it’s a big deal.

Several years ago, Netflix revamped their performance management by completely doing away with annual performance evaluations. Annual reviews were irrelevant one year later, consequentially meaningless, and they felt like a waste of time.

Instead, Netflix opts for a 360 degree review procedure. The reviews are regular but informal. In this new procedure, employees are advised by their colleagues on what they should stop, start, or continue. The reviews began anonymously at first to avoid awkwardness, but since then, they shifted to signed feedback and later face-to-face 360 reviews. Opting for full transparency, Netflix believes people can handle anything, as long as they’re told the truth.

Despite ditching formal evaluations for the 360 degree review process being bold enough, Netflix makes the reviews public. In fact, employees are encouraged to give one another blunt feedback with the purpose to provide ongoing opportunities for improvement. Their belief is that in order to build a dream team, an organization must “ foster collaboration, embrace a diversity of viewpoints, support information sharing, and discourage politics.” This can’t be done without hiring well.

The desire is for one entire dream team versus a few small groups spread out throughout the company. Managers use what they call a “keeper test” to build their team. Essentially, they’re asked to question “Would you fight for that employee?” The end goal is to give ownership of building great teams back to managers.

Netflix wants their employees to think independently and be able to make decisions on their own. The leader’s main job at every level is to provide clear and complete context to create autonomous thinkers. With the right information, employees are given the confidence to make great decisions.

Former Chief Talent Officer and co-author of Netflix’s culture doc Patty McCord says “The best managers figure out how to get great outcomes by settling the appropriate context, rather than by trying to control their people.” It’s important that managers at Netflix don’t try to control their staff, rather provide the framework to get the best results out of them.

How do employees feel about it?

It seems that getting fired is never really far from your mind, if you work at Netflix. The keeper test in itself is not always a source of comfort for employees. Managers also say it makes them feel pressured to fire people or “risk looking soft.” According to Glassdoor, the culture of fear is actually one of the most frequent cons. Many employee reviews mention the highly competitive environment makes work-life balance difficult to achieve. Other cons focus mostly on the transparency of the 360 review process; learning the details about why someone was let go or watching the politics carried out after uncomfortable feedback is made public.

So how is it that they maintain a seemingly average score? What are the pros that make working at Netflix a positive experience? Most reviewers seem happy about the perks; free lunch, free coffee, flexible schedules. However, the most resounding pros listed repeatedly are compensation, freedom, and responsibility. Netflix’s theory of responsible people thriving on freedom really works here and the employees seem to love it.

Can the Netflix approach work for you?

At Netflix they hold strong to the belief that if you talk simply and honestly about performance on a regular basis, you can get good results. Opting for full transparency is certainly not for everyone. Employees chime in on the company’s path, price increases, logos, literally everything. But can this work for any organization? McCord’s own advice would tell managers to think like business people and ask “what’s good for the company?” Then, implement those strategies, because when a company is at the top of its game, the people and their morale are also.