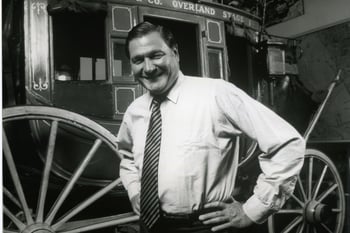 Carl Reichardt is one of those epic CEOs business authors love to write about.

In the late '80s, he famously led Wells Fargo through an historic cost-cutting exercise that delivered returns of 33.5% to shareholders, despite a massive real estate crash that put many of his competitors out of business.

Carl was ruthless. He froze executive pay raises, closed the private dining room and sold the corporate jet. His penny-pinching ways ultimately earned him the title of, "The Banker Who Would Be Scrooge".

"There's too much waste in banking. Getting rid of it takes tenacity, not brilliance," he proclaimed. It was a mantra that would go down in business history.

Which got us thinking…

What's the real difference between tenacity and brilliance? Can a business succeed with one and not the other?

There are TWO Types of Employee Performance

Lindsay McGregor and Neel Doshi are co-authors of Primed to Perform: How to Build the Highest Performing Cultures Through the Science of Total Motivation.

In researching for their book, Lindsay and Neel asked 2,823 US-based employees whether they have the ability to find new ways of working. Only 27% said yes.

That's because the vast majority of businesses only measure an employee's tactical performance. That is, the steps, process and standard operating procedures that can be easily tracked from one day to the next. Number of widgets produced per hour is the classical example of a tactical performance metric that can be found in almost every business system.

The ability to consistently complete these tasks to a highly efficient degree is what constitutes a company's "tenacity". So it follows that this is how most employees should be measured.

But there's another type of performance that often gets overlooked.

Adaptive performance is an employee's ability to innovate a better process, standard or SOP. When an employee comes up with an idea for how to shorten the number of steps in the assembly line, or veer off-script to creatively upsell a client — that's adaptive performance in action. Some might even call it brilliance.

Why You Need Both

It's success was largely due to executing simple ideas.

Before Carl, Wells Fargo had exuberant culture that would have surely led to its demise. The Scrooge CEO rolled up his sleeves, did the simple things with tenacity and saved the company in the process.

Many employees don't have the luxury of CEO-level autonomy.

That's why it's important to consistently encourage (and measure) both an employee's tactical and adaptive impact on the business.

(In an ironic twist, Wells Fargo's overemphasis on tactical goals may have been part of what led to its recent account fraud scandal.)

A balance of tactical and adaptive performance is what helps even the scales between goals and expectations so employees don't feel pressured to compromise the business values (or their own morals) just to hit a target.

Tactical and adaptive performance are the yin and yang of every high-performance business.

In order to free up your employees to innovate new efficiencies, you must protect their time. That means delivering the tactical performance structures that help them produce quality work faster so that they have time and energy to think creatively about how to do things better.

To strike that balance, spend some time thinking about which specific aspects of an individual's role absolutely must be measured on the tactical level versus those that can be opened up to adaptive performance.

For example, could you grant your new business team the autonomy to spend up to X amount of money in discounts, refunds or gifts without manager approval? How does this affect your NPS score and close rates?

Look beyond the non-negotiables to identify clear places where employees can act autonomously. Then focus on the impact their adaptive performance has made on the organization. And if you're ever in doubt, simply sit down with your team and ask for their ideas.

Here are some questions to think about:

Build the balance into your culture by making these sit-downs routine. Next time the proverbial "stuff" hits the fan, you'll be glad you did.

Keep going: Why modern performance management incentivizes both tactical and adaptive performance, and what else sets it apart from traditional approaches.