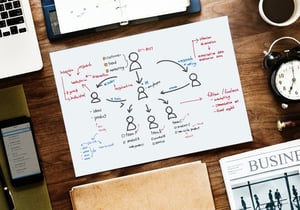 There is a large body of online content offering general tips and guidelines on performance management. And sure, they can be helpful. But they can also be a bit...one-size-fits-all.

The story of Jack Welch and his epic "rank and yank" system is one for the business annals. To date, it just may be the biggest examples of stack ranking in the workplace (not to mention the most extreme).

And those poor underperformers. Under Jack's ruthless leadership, those 10% of employees were often fired on the spot — and the feedback given was very candid. Welch felt that "failing to differentiate among employees — and holding on to bottom-tier performers — is actually the cruelest form of management there is."

To be fair, Jack didn’t use rankings solely for firing. Ranking was as much about growth as it was about assessment. He called his process "differentiation" and paired it with tools and coaching approaches to build up the 90% of employees that were performing up to par.

Business writer and consultant Ron Ashkenas notes that Jack’s differentiation “assumes that most people have the capacity to continually grow if they are stretched, challenged, and developed.” To match that belief, Jack offered in-depth assessments, rotation programs for new hires, training programs for new managers, and mentoring.

Though it's not as headline-worthy, ranking and yanking could actually be secondary to coaching in the legacy of Jack Welch. After all, he even had a campus where he brought high-potential executives and employees for intensive training and lectures that he sometimes led himself.

While it's tempting to view GE's rank and yank as a cold and detached way to manage employee performance, a case could also be made that it's actually a very human and hands-on approach.

Asana is an innovative tech company and popular team communications platform. And like the name could suggest, they have a surprisingly zen approach to performance management.

Rather than approaching feedback annually or linearly, Asana does feedback often and in very different ways (for example 100% face-to-face and with 0% paper trail).

According to a deep dive into the company from Rachel Zurer at Conscious Company Media, Asana has a self-review at the end of each year, on top of a biannual review of the company’s general direction. During the biannual review, the team takes weeks out to discuss specific goals and performance-related issues and hold regular feedback sessions with peers and managers in a closed retreat-like setting.

But a performance management process this hands-off could never exist without a strong culture to back it up.

Throughout the year, Asana maintains a strong focus on growth, transparency and trust. Instead of a traditional business hierarchy, the company is broken down into what they call AOR’s - Areas of Responsibility. An AOR might be "marketing", or "customer service", or any other area within the business. Asana’s founders offer opinions to AOR-holders, but ultimately trusts them to make the final call.

To manage their AORs, and all the feedback given, Asana actively works to keep the load lighter and the human contact tighter. New managers only have 4-6 employees (or, "reports" as they call them at Asana) and experienced managers have 8-10.

It's tempting to see Asana as being on the other side of the spectrum from GE, but their focuses are similar. Both companies want to grow their employees, but each company looks very different (startup vs. massive manufacturer) and as such, they arrived at very different solutions.

Valve is a video game company that has made some of the world’s most popular games. The company has roughly 360 employees and well over $1 billion in annual revenue.

As you would imagine, it's a wildly creative company. To stay that way, Valve shed all hierarchy and created what they call, “Flatland”. Valve writes in their employee handbook that, “when you’re an entertainment company that’s spent the last decade going out of its way to recruit the most intelligent, innovative, talented people on Earth, telling them to sit at a desk and do what they’re told obliterates 99 percent of their value.”

In Flatland, employees create teams as needed. Their desks come equipped with wheels so they can rearrange their space. Hiring is also an employee initiative and they're encouraged to interview candidates and help make hiring decisions.

Given its unique culture, you might think Flatland would have a pretty "out there" performance review system. But according to author of Under New Management, David Burkus, that's not so.

Valve creates a team of employees who conduct performance interviews with everyone in the company, asking them who they worked with and what their experiences were working with that person. They anonymize the feedback and present it to employees. It’s a fairly standard 360 system.

According to their former economist-in-residence, Yanis Varoufakis, "It is important to understand that such spontaneous order-based enterprises rely to a large extent on individuals that believe in the social norms that govern their existence. So by the very nature of the beast, you don't have people there who try to hide and who try to somehow create a smokescreen around the fact that they're not very good at what they do."

When someone can’t quite fit in, they talk to the the employee to find a solution. If firing is the consensus, they make an attractive severance offer and part on amicable terms.

Flatland, rank and yank, or AORs might not fit for many businesses, but they're a great reminder to try new things and commit to the unique "extreme" that works for us.